Bruce Arms, Pewsey Vale
31st March-2nd April 2017
Charity in aid of Air Ambulance raised £700
Friday, a dry bright, early afternoon jaunt via Chippenham, Lyneham and Avebury to pick up the first willing Ogri participants of our West nominated rally. An eager convoy of nine landed on site after just one breakdown/bump start (prospect) which half of us rode passed waving! Seven more joined us on site for the usual Friday ‘party’ night filled with much alcohol, music and ‘sort of’ dancing (to Rockabilly).
Budweiser aided unpacking while Jura and Gentleman Jack got the evening underway. Real ale and Black Rat I think finished us off!
Bed times were staggered and some more ‘interesting’ than others. Apparently Ogri now offer a free bed warming service – by Mark?!**! Undressed and asleep in HIS sleeping bag in HIS tent he was rudely awakened by the two tent owners. This was remembered in the morning but where it had taken place remained a mystery. The tent was apparently the same colour, shape and was in ‘that’ direction – Noooo, after Rob bellowed ‘who had a fat kid in their tent last night?’ the location was discovered. Opposite direction, different shape, different colour but still containing his ‘horn’ (drinking!). Everybody/thing was reunited, then his hat turned up from another location?

After a sunny afternoon we had some rain in the night and it was quite chilly, more for some than others – A few members were soaked through after a shower incident (forgot to take their clothes off) and Chantelle packed ‘fluffy blankets’ and pillows off the sofa, our very own ‘Piglet in a blanket’. Next morning, Griff snuggled with the fluffy blanky. It was also discovered it was still a bit nippy to be in Summer sleeping bags!
Saturday morning six Ogri bodies left and five arrived. Damage tried to leave but Bam Bam had other ideas, yay, we had a prospect to play with for another day.
With a bit of a black cloud looming it stayed mostly sunny with a shower 3pm then again in the night. Red kites soaring above, the Jura was polished off mostly by Rob and Steve and an ale supply was collected for consumption up until the bar opened at noon. Not a drinker of ale or Jura I had a super long wait for the Black Rat to become available, how does fifty minutes seem like hours?
After unwrapping a bike and its owner from cling film the ride out came and went, rather went then came, without any sober enough Ogri as usual. Meanwhile, proceedings had adjourned to the outside lounge area and ice cream and sprinkles was in order. Male bonding and other such silliness continued until it was evening bar time again. I think everybody made it into their own beds and mostly got off site a.m. Sunday (not VP!)
Thanks Black Rats for an excellent weekend, see you at ours in June.
Tracey McC @ OGRI MCC 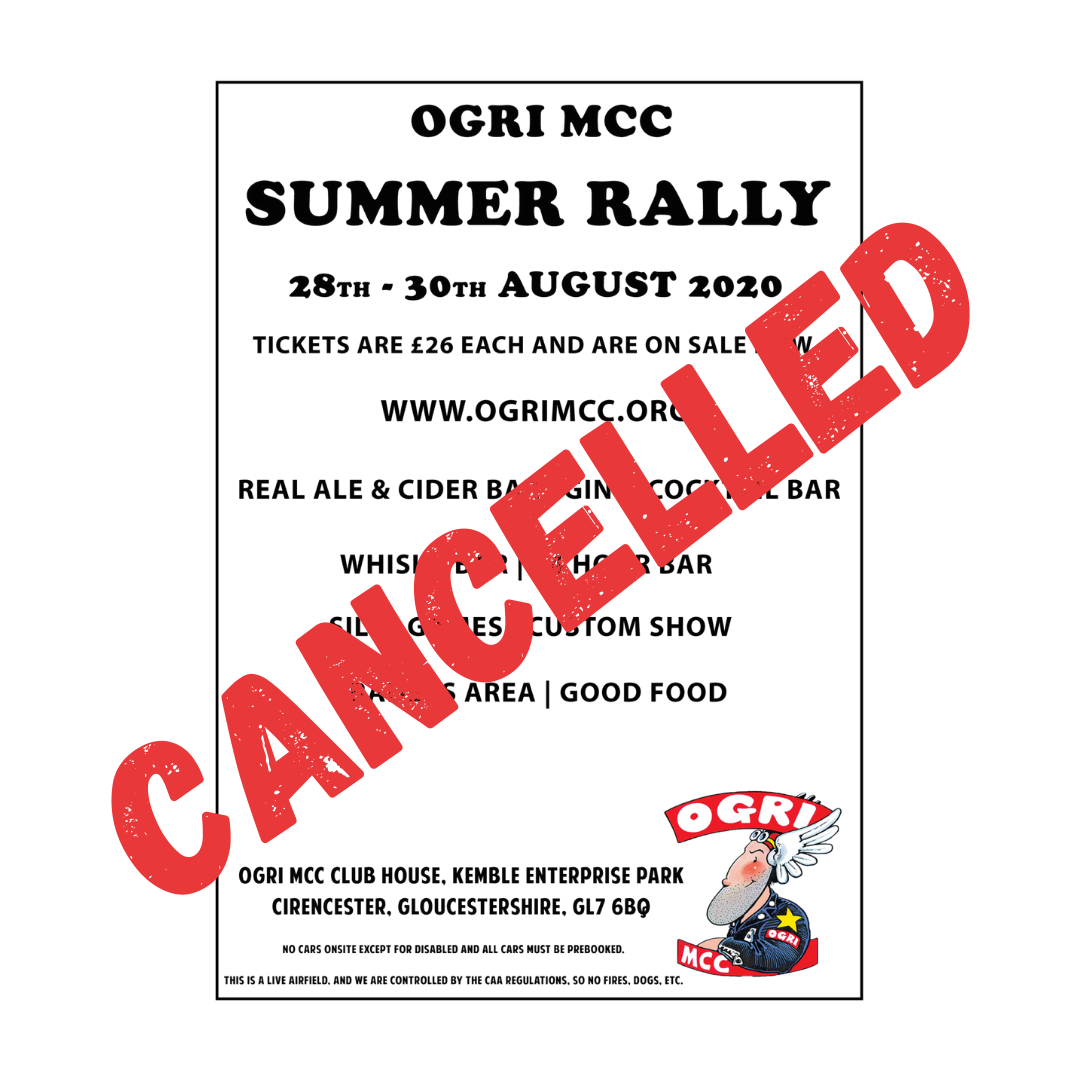 Hello All, We have been keeping a close eye on the Government advice and we were seriously hoping to be able to […]